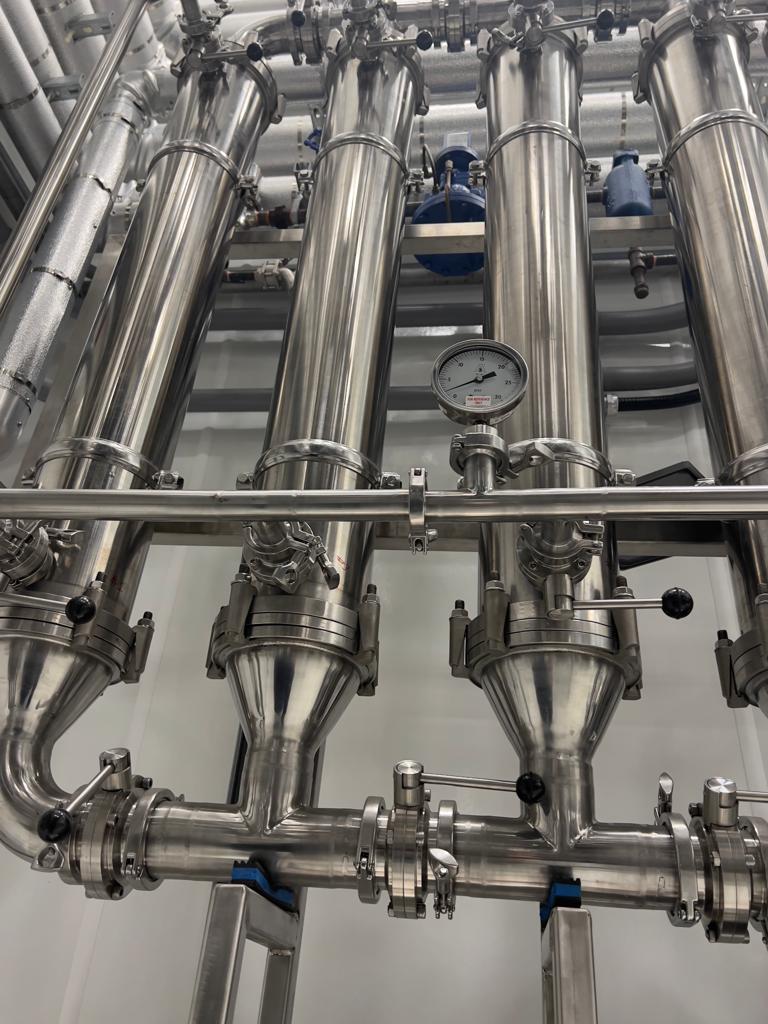 We hear from growers all the time who are interested in trying MIICROBIAL MASS but are not sure if it will work in their system.  Usually this is either because they are worried about biofilm buildup, or they are using products containing hypochlorous acid or hydrogen peroxide which are intended to kill microbes.  After all, it doesn’t seem to make much sense to mix microbes with antimicrobial products.  And why would anyone “running sterile” want to add microorganisms?

In fact, MIICROBIAL MASS is compatible with just about anything a grower might be using and it will not contribute to biofilm build-up in water lines or clog drip emitters.  Maybe you’ve heard us talk about this before, but I thought it might be a good idea to put together a post to discuss these concepts in greater detail.

So join me as we go down the rabbit hole…..

Many growers today are using various oxidizing agents in an attempt to keep their systems sterile.  The most common motivation for this seems to be the prevention of biofilms in hydroponic systems and irrigation lines.  Biofilms are formed by communities of microorganisms which adhere to surfaces and develop a slimy matrix of extracellular goo.  When biofilms are allowed to grow within irrigation lines and reservoirs, they can reduce flow rates, clog emitters, alter the chemistry of the fertigation solution, and introduce harmful pathogens into plants’ root zones.  As many experienced commercial growers can attest, once biofilms are allowed to form, it can be very difficult to remove them.  Prevention is key.

Biofilm prevention is a major reason why many growers avoid the introduction of any organic or biological products at all in their systems.  Since biofilms are caused by microorganisms, there is a compelling logic to avoiding these products.  Some organic products, like those containing microbe foods like sugars and amino acids, will provide food for biofilm-producing microorganisms and create an increase in biofilm build-up.  Similarly, most of the microbial products sold in the market contain metabolites left over from the fermentation process used to culture the microbes.  These are the waste products expelled by microorganisms – you can think of them as microbe poop.  These will also contribute to biofilm buildup.

Let’s imagine that we are brewing up a batch of aerated compost tea.  This will give us a good idea of the types of substances we probably don’t want to run through our automated irrigation systems.

A good compost tea will be teeming with microbial life.  Many of these soil microorganisms will be producing biofilms to help them stick in place in the root zone.  And they will also stick onto the surfaces of an irrigation system.  Anyone who has ever brewed a compost tea will be familiar with the slimy layer that inevitably forms on the inside surfaces of the brewer.  This is precisely the slimy substance that so many growers wish to avoid in their water lines.

But that’s not all.  This imaginary compost tea probably still contains some leftover molasses, kelp, humates, and whatever other food resources we introduced at the beginning of the brew.  Lots of this stuff would have been eaten up by the microbes during the brewing process, but some would undoubtedly still remain.  And these will provide an excellent food resource for any biofilm-producing microbes lurking in water lines.   Add to this all of the metabolic byproducts expelled by the microbes during the brewing process – that’s the microbe poop I was talking about.  While these substances can provide great benefits to plants and the microbial communities in the rhizosphere, they will also provide yet another potential food resource for those bad guys microbes that create biofilms and clog emitters.  Again, all of this stuff is great for plants, but could become a huge headache for the grower.

This is why so many growers that we talk to want to avoid inputs that include these types of ingredients.

Don’t They Make a Bottle for That?

Along with avoiding certain inputs, many growers today rely on oxidizers like hydrogen peroxide and hypochlorous acid to maintain clean lines.  These products are popular because they can be a simple and effective way to kill unwanted microorganisms within hydroponic systems.  They do this by oxidizing cell membranes and snatching electrons away from molecules, resulting in loss of structure and eventually cell death.  This can work well for biofilm prevention by destroying microorganisms before they have a chance to become embedded on surfaces.  By running diluted oxidizers through the system at all times, growers can reduce their risk of these types of problems.  It is a logical approach, especially in large-scale commercial grow facilities which necessarily rely on large and complex fertigation systems with miles of water lines and many thousands of emitters.  At such scales, uncontrolled biofilm can become a true nightmare scenario.

And typically, growers who use oxidizers do not use beneficial microbes.  This is one of the tradeoffs that until recently has been unavoidable.

But, do we really have to choose between clean lines and beneficial biology?  What if we could enjoy all of the benefits of a fully automated, highly efficient fertigation system in which we regularly run hypochlorous acid or hydrogen peroxide and still utilize a powerful consortium of beneficial microorganisms to help inhibit root zone pathogens and maximize plant vigour and growth?  What if we could have all of this, and still not have to worry about biofilm?

This is one of the areas in which MIICROBIAL MASS really stands apart from other biological products.  But to fully understand why, we need to first discuss our unique production process. 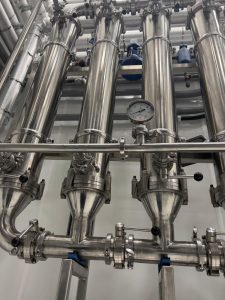 MIICROBIAL MASS and MIICROBIAL MASS PRO are made up of five strains of beneficial bacteria from the genus Bacillus.  Bacillus bacteria are unique in that they are the only group of bacteria that are able to sporulate; to transform from an active bacterium which is eating, breathing, and expelling waste, to a dormant spore which exists in a state of suspended animation.  Our proprietary production process begins by growing each of our unique strains in isolation and then changing conditions in the bioreactor to force them to sporulate.  Once they have formed spores, the bacteria will no longer produce waste products or biofilm.  This means that they run clean through irrigation lines.

The next step in the production process is to wash the spores.  At this point, any residual food resources are washed away, along with all of the metabolic waste products that were created by the bacteria while they were growing – remember all that microbe poop?

Next, we pasteurize the bacterial spores.  This involves gently heating them to a high temperature.  As spores, the bacteria can withstand these high temperatures, but in their vegetative form it is deadly.  So, the heat destroys any active bacteria that failed to sporulate in the bioreactor, guaranteeing that no active bacteria make their way into the bottle.  This step also provides an extra level of assurance that the product will not be contaminated by other microorganisms since they, too, will be destroyed by the pasteurization process.

This whole process is repeated five times, with each bacterial strain being produced separately.  At this point, we have five batches of dormant bacterial spores which have been washed and pasteurized.  Now we can mix the five strains together in very precise ratios so that each bottle of MIICROBIAL MASS is perfectly consistent.  By the time the product is bottled, there is nothing left that would contribute to the formation of biofilms in water lines.

This production process is entirely unique, and it explains why MIICROBIAL MASS is one of the only beneficial microbe products that runs cleans through irrigation lines. 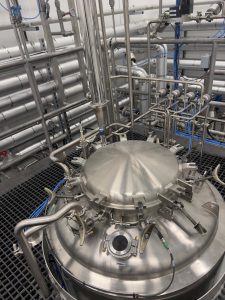 But What About All Those Oxidizers?

In their dormant state, Bacillus bacterial spores can withstand extremely harsh environments.  This includes high heat, like that involved in pasteurization.  The spores can also withstand very high salt environments and exposure to a wide range of chemical agents. This means that growers can incorporate MIICROBIAL MASS into their nutrient recipes with no risk of accidently killing the bacteria.  Even the inclusion of oxidizing agents like hydrogen peroxide and hypochlorous acid will not a pose a threat to the bacterial spores.  Growers are able to mix MIICROBIAL MASS in their reservoirs with their favourite antimicrobial products without risk of killing the bacteria.

Once the bacterial spores reach the rhizosphere, they revert back to their active, vegetative form.  In this state, bacteria are far more vulnerable to adverse conditions.  But they have various strategies to protect themselves from oxidation reactions.  They will not be able to withstand the high oxidation levels they could when they were spores, and different strains have different levels of tolerance.  But part of the reason that our five strains were selected is that they are exceptionally tough when it comes to withstanding the effects of oxidizing agents.

Our Compatibility Chart provides thresholds for MIICROBIAL MASS in relation to oxidizing agents and other chemical compounds.  As long as the rates described in the chart are respected, MIICROBIAL MASS is fully compatible with all of the popular oxidizers available on the market.  At these rates, our bacteria are able to live happily within the root zone and provide the maximum benefit to the plant.  The rates for hydrogen peroxide are a little higher for growing media such as peat moss and coco coir which contain high quantities of organic matter.  But even fully non-organic systems like rock wool and deep water culture allow for quite a generous amount of hydrogen peroxide to be added while still enjoying all of the benefits that MIICROBIAL MASS has to offer!